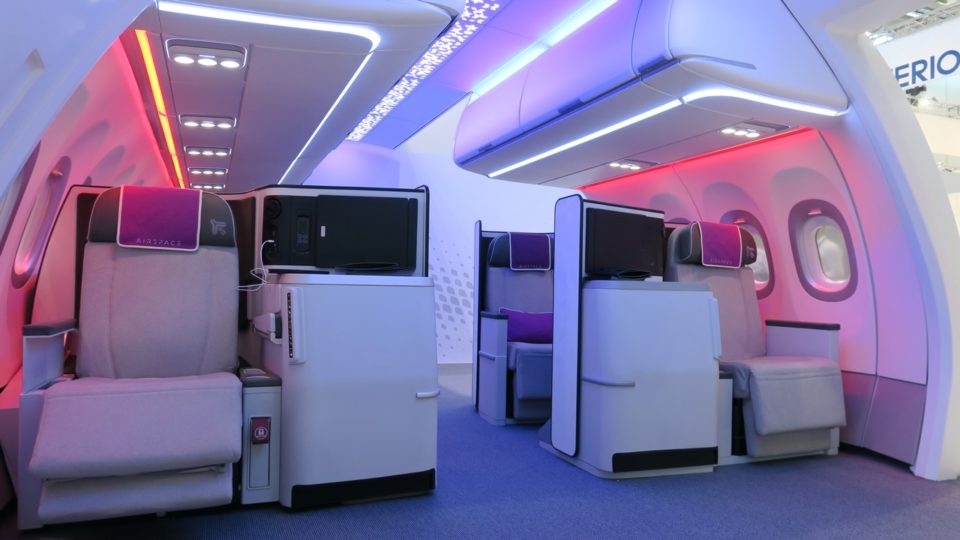 Each year since 2002, the industry’s biggest airline cabin trade show has taken place in Hamburg, Germany. The Aircraft Interiors Expo (AIX for short) has become an institution over the years, and once again Flight-Report.com was able to attend and check out the latest in PaxEx (Passenger Experience) developments.

AIX is a big deal for anyone in the PaxEx world and a major platform for suppliers to show off their products and innovations to potential customers like commercial airlines and aircraft leasing firms. All the major aircraft seating manufacturers, In-flight Entertainment providers, as well as the big aircraft manufacturers, Airbus and Boeing, were there.

Let’s begin with them:

Airbus showed off its signature “Airspace” cabin trim, which can be found as the default option on the Airbus A350 and A330neo. In mid-2020, the Airbus Airspace cabin will be available on the Airbus A320neo family.

Airbus’ “XL bins” can accommodate twice the cabin baggage as traditional overhead bins. American Airlines was the first airline to roll out these larger bins with the delivery of its first A321neo earlier this year.

As far as PaxEx is concerned, in the context of the Airbus vs Boeing rivalry, the European giant has been touting its more spacious cabins—wider fuselages able to accommodate wider seats for increased passenger comfort.

Over at rival Boeing, the displays were much less flashy and exciting. The U.S. aircraft maker mainly showed off some aspects of the future 777X’s cabin—clearly much inspired by the 787 Dreamliner cabin.

The new 77X overhead bins have a similar swivel down design found on current 777s and 787s but are more spacious and protrude less into the cabin, giving an overall feeling of airiness.

The diming feature found standard on Dreamliners is an option for 777X customers, rather than being standard like on the 787.

With advancements in materials and technology, the 777X sidewalls will be thinner, making for a wider cabin and allowing for wider seats, which will potentially make the now standard 3-4-3 Economy class configuration a little more comfortable.

After the Airbus/Boeing rivalry, let’s move on to two competing seat manufacturers from France. One, a lesser known relative newcomer, the other a giant global organization with over 100 sites worldwide—namely STELIA Aerospace and Safran seats.

STELIA Aerospace has the particularity among commercial aircraft seat manufacturers of offering only Business class seats. Although the STELIA name may not be as well-known as some others, the French company’s products can be found gracing many of the world’s largest carriers’ business class cabins, including Singapore Airlines, Turkish Airlines, China Southern, Etihad Airways, Iberia, and Air France.

While delivery delays at its main rival have regularly made headlines over the years, the Rochefort-based seat-maker is proud to have produced more than 2000 seats per year since 2008—all of which were delivered on time.

For the short/medium-haul market, STELIA has de CELESTE seat on display. The CELESTE features a fixed shell to preserve personal space as well as a comfortable “zero G” position, which involved reclining into a cradle position.

For longer missions, STELIA Aerospace has developed the ELYSIUM seat in partnership with Air France for the French flag carrier’s A330 refresh. The ELYSIUM is an evolution of the EQUINOX 2D model. It is classified as an Efficient Business class seat by the company for its high-density 2-2-2 layout on an A330 type fuselage. The ELYSIUM is also offered for narrowbodies such as the A321LR.

Compared to the EQUINOX model, the ELYSIUM offers more storage.

In the full-aisle-access category STELIA Aerospace offers the OPAL. The efficient staggered layout allows for a higher density configuration while preserving passenger space and privacy. As with the CELESTE seat on its new A320s, Air Senegal was the launch customer for the OPAL with delivery of its new A330neo aircraft.

Also in a staggered layout, the more high-end SYMPHONY model is highly customizable for the most demanding customers. Singapore Airlines was the launch customer on its new Boeing 787-10 fleet. Turkish Airlines will soon follow with SYMPHONY seats in the Business class cabin of its new B787-9 aircraft.

Safran’s Versa Business class seat is the company’s latest evolution of the well-known and highly-rated Cirrus model. Some improvements over the classic Cirrus model include a larger, fixed IFE screen, which makes stowing screens for takeoff and landing a thing of the past.

The Versa also features conveniently large side consoles—this translates into a decent amount of foot space for the passengers in the row behind.

As closed suites in Business class become more common, the Versa comes with the option of a flexible door, closed by a magnetic device.

Perhaps the best known Safran Business class seat model, after the Cirrus/Versa, is the Optima, which launched with United as the much publicized “Polaris” seat. Air France will outfit its new A350-900 fleet with a customized version of the Optima, due for delivery later this year. The French Flag-carrier will also retrofit the seat on some higher-density B777-300ER aircraft known as the “COI” sub-fleet (Caraïbes-Ocean Indien).

The latest generation of the Optima model features a lowerable separator between the two center seats allowing for conversion into a double bed (note, this feature is not available of the UA or upcoming AF versions).

Safran seats also had the Skylounge Core on display, which offers direct access to the aisle and high walls for privacy.

Let’s not forget the Premium Economy and Economy cabins. Unlike fellow French seat-maker STELIA, which only offers seats for the pointy end, the much larger Safran offers products for all passenger cabins.

For the ever-growing Premium Economy market, Safran had the Z535 model on display. The seat model can be found on Singapore Airlines, Vietnam Airlines, and relative newcomer to the Premium Economy game, Air Tahiti Nui.

Moving across the English Channel to the UK, we find Northern Ireland-based Thompson Aero Seating, which has become one of the most recognizable names in premium cabin seating. Unlike many of its competitors who have undergone re-branding or re-naming over the past several years, the Thompson Aero name remained following the acquisition by the AVIC (Aviation Industry Corporation of China) group in 2016.

The base model, first introduced a decade ago, makes efficient use of floor space with a staggered configuration to achieve a fully flat bed with similar seating density as older 2-2-2 business class configurations.

The Thompson Vantage seat is particularly flexible and seen on a wide range of fuselage sizes. The Vantage seat can be seen not only on Airbus and Boeing widebodies, but also on single-aisle aircraft such as the A321 and B757.

Carriers with the original Vantage seat model on widebodies include SWISS on its B777-300ER and A330/340 fleets, Aer Lingus on A330s, and Delta on B767s. Aer Lingus makes full use of the Vantage seat’s flexibility as the seats are also outfitted on the Irish carrier’s B757-200 narrowbody fleet and will be featured on its future A321LR fleet, due for delivery later this year. Another well-known airline with Thompson Vantage seats on narrowbodies is JetBlue Airways, where the premium cabin seats are branded as “Mint”.

As the traditional Vantage model does not allow for full aisle-access from all seats on widebody fuselage cross-sections of A330 type and larger, Thompson Aero introduced the more spacious Vantage XL model several years ago. As “full-access” has become standard for long-haul Business class, the ever-flexible Vantage model was adapted accordingly.

The wider Thompson Aero Vantage XL can be seen on Qantas, Rwandair, SAS, and EVA Air among others.

Following the introduction of enclosed suites in Business class by Qatar Airways and Delta Air Lines in 2017, some two years later most major aircraft seat manufacturers are now offering an optional door on certain premium seat models. Thompson Aero was arguably the first to venture into the world of Business class mini-suites as Delta Air Lines was the first airline to announce a closed suite in 2016, though Qatar Airways and its Collins Qsuite flew first (but was announced later). Branded as “Delta One Suites,” the Delta enclosed suites are a customized version of the Vantage XL model with doors.

Fellow SkyTeam member China Eastern has also jumped in on the action with enclosed Vantage XL suites introduced on its new A350 fleet.

The Thompson Aero Vantage line is set to evolve even further with the upcoming Vantage Solo model. Though Thompson introduced the concept in 2016, the new model has yet to go into production, but is marked as “coming soon” on Thompson’s website. The Vantage Solo model was designed specifically for narrowbodies and will allow for direct aisle-access for all passengers. As more single-aisle aircraft, such as the A321LR and B737 MAX, begin flying shorter 7-9 hour Transatlantic type long-haul missions, the Vantage Solo may well provide a solution for full-aisle-access in Business class.

Today Collins Aerospace products, which, aside from seating, also include cabin trimmings such as galleys, can be found on practically every major commercial airline.

Of course, Collins had its best seating products on display, including the best-selling long-haul Premium Economy product (and short/medium-haul Business class), the MiQ seat.

The Collins Air Rest offers a little more space and privacy for the medium-haul Business class sector. The fixed shell preserves personal space with the seat reclining inside the shell.

And last, but not least, we have the ever-popular Super Diamond reverse-herringbone Business class seat.

Pictured below is an optional first-row model allowing for even more space.

And of course, the Super Diamond now comes with an optional door

Though not all Business class seat models will work with doors, the spacious Super Diamond seat should make for a non-claustrophobic experience. The world will soon know with the upcoming introduction of the new British Airways Club Suite. 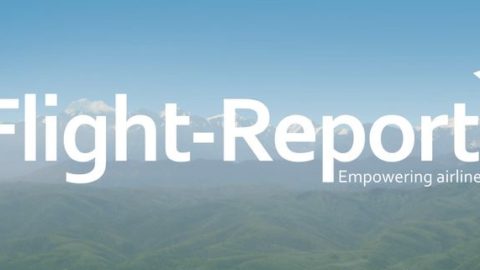 Welcome to the New Flight-Report.com 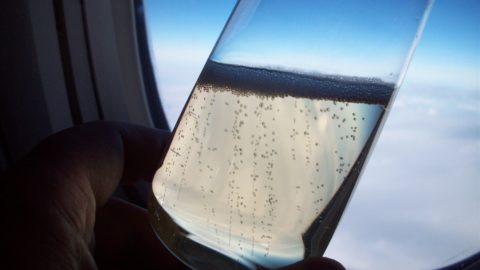 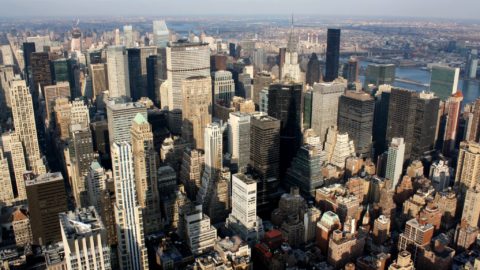